Death of the Telephone 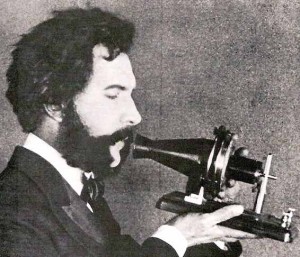 Well, maybe not death. But some kind of transformation. Most everybody carries a telephone on their person these days. But how often do you use it to talk to somebody with your voice?

I picked up a link to this interesting New York Times article (on Facebook, naturally): Don’t Call Me; I Won’t Call You. It suggests that Alex G. Bell’s invention is slowly going the way of the dinosaur as people trend toward text messages and emails as the primary means of communication – in their social and business lives – resorting to the telephone only by appointment or when they have no other choice.

(That’s a picture of Bell above, by the way, using his “hand-held phone” – LOL!)

I was particularly amused by the comments of Miss Manners: “Phone calls are rude. Instrusive. Awkward. Thank you for noticing something that millions of people have failed to notice since the invention of the telephone until just now. I’ve been hammering away at this for decades. The telephone has a very rude propensity to interrupt people.”

Honestly, I always thought that! I’ve always been hesitant about making phone calls, afraid to annoy and interrupt people. I try to avoid what I suspect might be their dinner hour – or their lunch time – or before they get up on a Saturday. A scheduled phone call is one thing – confirmed by text or email: I’ll call you tonight around 8pm, okay? But, just out of the blue?

Nowadays, I don’t make many calls. I might have to talk to my daughters’ friends’ mothers, to confirm that the play date they made by text is actually a go. I have to call to make doctor’s appointments (And isn’t that annoying? Why can’t that be arranged by email?) I call my mother (because she won’t email) and my sister (if she won’t answer emails) and my husband (when he can’t be reached by email).

How about you? Do you phone anybody anymore?