How to Waste Your Last Day

So, last Saturday was supposed to be The End, right? And how did the Salerni family spend that day? Well, the hard-working and responsible members of the family (Bob and Gina) spent the day making needed repairs at our Pocono house and meeting prospective tenants. The goof-off members of the family (Gabbey and I) spent the day fooling around and playing on the internet.

I blame Dave Singleton who, on Saturday morning, posted this link on Facebook. Apparently, the challenge was to photograph your own “rapture” scenario. Where were YOU when you got taken? No further prompting needed; Gabbey and I got right to work.

It was a gorgeous day, at least in Pennsylvania. Perfect for riding your bike: 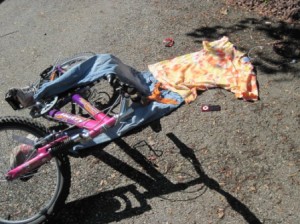 Or cleaning the pool:

Of course, Gabbey prefers to stay inside working on her novel: 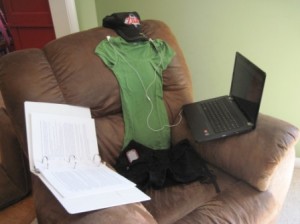 And everybody knows how I spend my time: 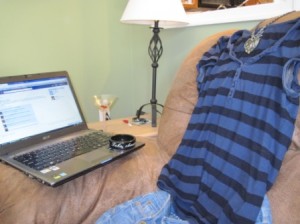 After posting the pictures on Facebook and Twitter, we spent the rest of the day cracking up over all the other ones that were posted. Honestly, I didn’t think my own “rapture” photo was particularly original, but somehow it got picked up by Mashable in their Top Ten. (Definitely check these out! Some are hilarious!)

The biggest surprise came on Sunday when I got an email from the crew at ABC World News with David Muir. They were doing a rapture story and wanted permission to use my photo. Uh … yeah, sure. And darned if they didn’t show it on the 6:30 pm news.

The news story as a whole was very serious and somber, spotlighting believers who spent their entire life savings to “warn the world” and are now left with nothing. Nothing – no savings, no job, and in some cases, no home. Meanwhile, Muir pointed out that most of the world thought the entire thing was a joke – and on came a 10 second parade of prank Twitter photos, including mine – which made me feel kind of insensitive.

I meant no disrespect to those people who deeply believed Judgment Day had arrived. But if it HAD been the last day, at least I spent it laughing. And I can’t think of a better way to go.