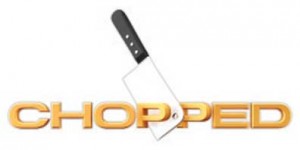 Today, I bring you a guest post from Food Network Fan Extraordinaire – Gina Salerni, who will reveal to you the shocking secrets behind her former favorite show, Iron Chef America.

If you have ever watched Iron Chef America then you should know that it is not completely real. The two competitors know who they’re competing against weeks before the actual competition. They also know a couple days before the battle a list of 5 possible “secret” ingredients. They can plan their dishes and make a shopping list of the food, equipment, and dishes they will need. When they are shown the ingredient in the beginning of the battle they have fifteen minutes to plan and tell their sous chefs what to do. In the hour they have, all they have to do is make the food and plate one dish. Then they are given an extra 45 minutes (off camera) to make the additional 3 platings. If you watch carefully you can see these things are true.

Chopped, however, is real. There are 4 chefs and they are given 20 minutes in the appetizer round to make a dish. The tricky part is that that there is a basket of secret ingredients (about 4) which the chefs have to incorporate into their dish. The chef that does not do as well as the others will be chopped. They get 30 minutes for the entrée and dessert round.

I like Chopped more because it is more challenging. If you watch Iron Chef America then I think that you should know these facts.

Well, I had no idea! Gina researched this on her own.

Chopped has become a Salerni family favorite. We are even planning our own Salerni Chopped Competition, but we are still negotiating the details. Bob wants Gina on his team, but since Gabbey thinks all ingredients can just be thrown in a pot and boiled to make soup, I’m not entirely satisfied with my teammate. And who picks the mystery ingredients? I’m a little worried about leaving it in the hands of the opposing team, since Bob has a reputation for deviousness and Machiavellian strategy. (Sorry, hon, but it’s true.)

And who will be the judges? We could ask our neighbors, but we’d like to remain on friendly terms with our neighbors! If the Salerni family as a whole judges the dishes, that means the opposing team must eat the entrees, which does impose a limit on the wackiness of the ingredients. (I know Gina won’t let Bob pick octopus if she has to eat it …)

If we ever work this out, you – my loyal blog followers – will be first to know and hear about the results …