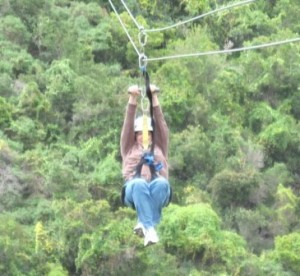 “The first thing we need you to do is take a large, confident step off the platform.”

I was sitting there in my helmet and harness last Thursday, holding my clip, wondering if I’d lost my mind. I was too old to be flying through the air, hanging from a cable 300 feet off the ground, traveling at – did he just say 40 miles an hour???

I willingly signed up for a zipline tour of Catalina Island, but like a fool, I thought we’d be moving at a slower speed. It was a tour; wasn’t it? Now this guy was describing how to hold a cannonball position while flying through the air — unless he gave a signal to slow down, in which case I was to straighten out and maximize air resistance, then curl back up before I hit the platform. I started chewing off my fingernails about then.

Luckily, there was another woman in our group even more nervous than me. She came inches from chickening out on the platform with the drop in front of her. But everybody cheered her on, including me. Because if she quit, I was going to leave with her! But if she actually jumped, there was no way I could back out.

She jumped, and I was committed. 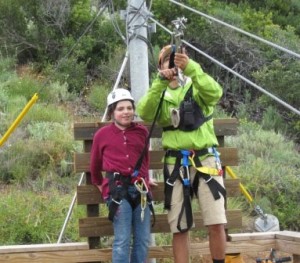 My two daughters went ahead of me. The guide tried to reassure each of them in turn, but they waved him off and said, “Okay fine,” and leaped. No fear. And then it was my turn.

I didn’t know what would be worse: taking that “confident” step off the platform or getting into correct position in midair. (I recall failing the gymnastic bars in high school.) But due to my height (or lack thereof) and the tension on the cable, stepping off was not a problem. As soon as the guide cut me loose, I was nearly yanked off my feet. And as it turned out, gymnastic ability wasn’t really required. I cannonballed.

The first zip was not as terrifying as I expected, although when I stood up on the other end, I had to grab the guide’s shoulders in surprise. My knees would not hold me up, I was shaking so hard!

The second zip was longer; the third zip was faster. By the last two, I learned how to change position to control my speed. All this above the spectacular Descano Canyon at Avalon – and yes, I was soon relaxed enough to enjoy the view! 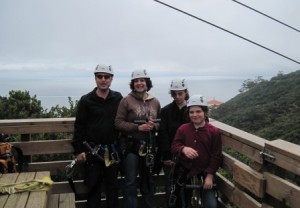 I guess I wasn’t too old to learn a new trick after all, which is kind of a relief to know.

And it occurs to me that many new ventures in life (including publishing) start by taking a confident step into thin air.