Me and My Volt 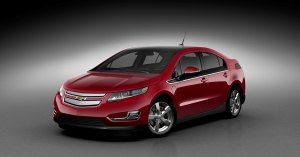 We have a third driver in the household now, and the need arose for a third car. (Not that the third car belongs to Gabbey. We all swap vehicles depending on the weather, purpose, destination, etc.) My husband selected a Chevy Volt – for which Pennsylvania was offering a substantial tax rebate. So far it has proved to be a fantastic electric/hybrid car. It runs on battery until the charge is used up, then switches seamlessly to the gas engine. We’ve put about 600 miles on it and used 6 gallons of gas. (I know gas is cheap these days, but we have solar electric panels on our house, so we don’t pay a lot for electricity, either.)

If I have any complaint about the Volt, it’s that the car is kind of whiny. It’s constantly beeping at me or displaying a warning. At first I couldn’t decide if the Volt reminded me of Marvin the depressed robot from The Hitchhiker’s Guide to the Galaxy or the Talky Toaster on Red Dwarf, but finally I realized it’s more like the Printer in this video, Your Printer is a Brat.

Bob says it’s because the car is almost sentient and it doesn’t want anybody to crash it.  Here is a typical exchange between us:

Volt: BEEP BEEP BEEP! Proximity alert! Oh my God, there are cars all around us! AAAHH!

Me: That’s because we’re in a parking lot.

Me: I am not. I’m backing out of a parking space. Chill out, will you?

Volt: Ice! There could be ice on the road!

Me: There could be, but there’s not. The roads are dry.

Me: Thanks, but I’m not in Baltimore.

Me: Now, come on! The car ahead of me braked, but I’m 5 car lengths behind him.

Volt: Front Collision Danger! You were going to hit him …

Me: I was not! I had my eye on him, at least until I had to take my eyes off the road to read your warning.

Volt: Ice! There could be ice on the road!

So, do any of you have a “smart car?” Does it have a personality?