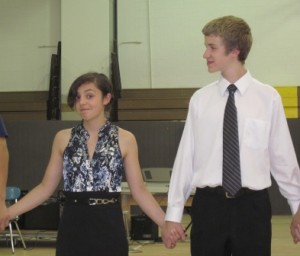 After posting that picture of toddler-Gabbey last week, I owe her one! And besides, this is worth bragging about. Gone are the days when Gabbey would (repeatedly) stick her head through the porch railing to confirm that (once again) she could get it stuck there. This is my grown-up girl now, just finished eighth grade and on her way to high school next year. 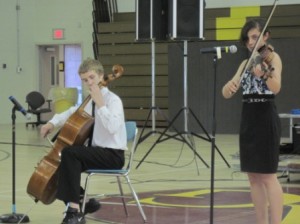 Gabbey and her friend Mike performed in the middle school talent show last week. With Gabbey on viola and Mike on cello, they performed an original arrangement inspired by The Final Countdown by Europe. They had no sheet music – Mike and Gabbey arranged this piece and played it by ear. 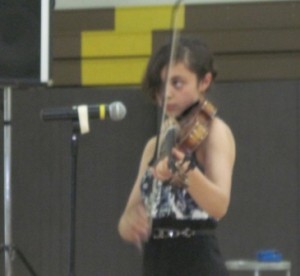 It’s a shame they had to perform in the gymnasium, but let’s not get me started on the lack of funding for the arts versus … say, sports. They were awesome in spite of the lousy acoustics.

Congratulations, Gabbey and Mike and all the other performers at the middle school talent show, especially Anna and former students of mine, Lori and Alexis. I was proud of you!