Road Signs to the Past 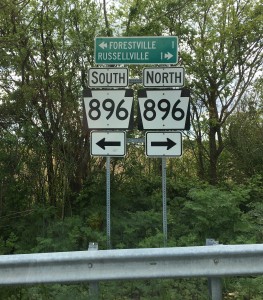 I’ve always been a little puzzled by this road sign at the end of an exit ramp off Route 1 near my home.

There are no towns 1 mile in either direction.

But there used to be. I finally got curious enough to look them up.

There was a tavern at the intersection of Newport Road (PA 896) and Limestone Road (PA 10) as early as 1737. A town grew up around the crossroads, which eventually came to be named Russellville. In 1823 Russellville had a population of one hundred with a sawmill, a hotel, two general stores, a grocery and a post office. There was also a private school known as the Russellville Academy.

None of those places exist anymore.

Forestville (and the forest it was named for) are also gone. Apparently there used to be a blacksmith shop, a store, and a post office.

Poof. Gone. But PennDoT still puts up signs telling you how to get there.

Do you have any historical leftovers where you live?