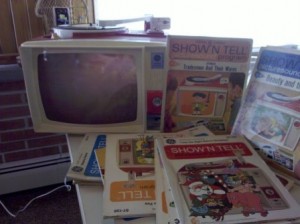 Two weeks ago, my sister’s family drove in from Kansas for their yearly summer visit, and the week was capped off by a barbecue at my parent’s house.

At some point during the meal, my mother started talking about cleaning out the stuff in the basement, wondering if she could send some of it to Goodwill. In particular, she asked if she could send off the Show-n-Tell. “Does it still work?” we asked. And nothing would do except for my sister and I to fetch it out of the basement and dust it off.

“This is an iPod Nano from the ‘70’s,” I replied. “It played music and videos.” I held up a plastic filmstrip and the adults laughed. The kids didn’t get it.

But my sister and brother and I were really excited. We put on the Wizard of Oz record and inserted the film strip. The film no longer moved by itself, but the record played, and Laurie and Brian and I all chimed in with the dialogue. We still remembered it by heart.

“So, can I send it to Goodwill?” my mother asked.

“Goodwill doesn’t want it,” my father said. “Just throw it away.”

Meanwhile, my husband and brother-in-law were already surfing eBay on their phones. “No, no, no!” they hollered. Even though it’s not completely functional, it’s worth some money – for parts – and for all the records we have to go along with it.

So, of course, now it’s sitting in my front room, until we decide what to do with it. Next family gathering, we’re going basement diving – for the Micronauts, the Space Lab 1999, the Six Million Dollar Man Lunar Module … Who knows? I could see us scoring dinner at a 5-star restaurant in Philly with the proceeds.

And of course, there are some things we would never sell … the Star Trek Enterprise playset, the 12-inch Star Wars dolls, and our entire set of – ahem – Dungeons and Dragons Manuals.

What’s in YOUR parents’ basement?