Snow and Ice Outside; Stinkbugs Inside 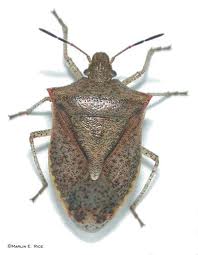 I can’t believe it’s February; there’s snow and sleet outside; record low temperatures – and I still have living stinkbugs in my house. As I write this, there is one flying round and round the light fixture, banging noisily into the glass globe.

Stinkbugs – oh, how we hate them.

My garage door opener failed last week, immediately after my husband left town on business, and I had to send an SOS to my brother-in-law Larry and my nephew Stevie. Turns out, a stinkbug got into the device, died in front of the sensor that let the opener know when it had finished its job, causing the motor to spin until it stripped one of the gears into … well, white plastic dust.

At least one of these blasted things appears in the house every day, so obviously they are living in the walls. They crawl out of the light fixtures and the baseboards.

Crush them or vacuum them up – and you’ll learn why they’re called stinkbugs. Over the summer, I swear an entire swarm of them must have sautéed themselves on the motor of my car, leaving me to drive around with their pleasant (ugh) aroma for days. In the winter – and one at a time – they’re less stinky, but no less annoying.

Having hitchhiked their way here from Asia, stinkbugs have no natural predators in America. I’ve read that bats eat them, but I’ve seen no evidence of that. In fact, we normally have a number of bats living around the house (we usually see them at night in the summer when we use the hot tub), but this past summer I didn’t see a single one. As far as I can tell the stinkbugs may have eaten the bats …

I thought they were bad last summer, but if I’m still having a problem with them in FEBRUARY, I shudder to think what they’ll be like next summer.