Steven Symes, Versatile Blogger, and Is There Anything I Haven’t Told You Already?! 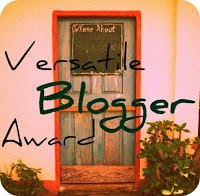 A couple weeks ago, Steven Symes passed on the Versatile Blogger award to me. If you don’t know Steven, who writes non-fiction and also paranormal fiction (despite being a skeptic), please check out his blog HERE.

Now, as part of this blog award, I’m supposed to share 7 little-known facts about myself. This had me scratching my head. I’m such a big blabber, is there anything I haven’t already told you?

I asked my family: “Hey, guys. I’m supposed to share 7 unknown things about myself on my blog. Any suggestions?”

Bob: “I think you’ve pretty much told everybody everything. I can’t think of what you could have left.”

Gina: “Maybe you should make stuff up. Tell them you’re a wrestler in your spare time.”

Gabbey: *ticky, ticky, ticky ticky on her keyboard* (She is working on her epic fantasy novel and ignoring us.)

1. Oooh, how about this? My teenage daughter is writing an epic fantasy novel. This summer, I really, really want her to spend some time reading the blogs of authors on craft and story-telling. Gabbey is a talented writer — probably more talented than I was at her age. And she has aspirations of being an agent or editor. I think blogs are an excellent way for her to learn and make a few connections. 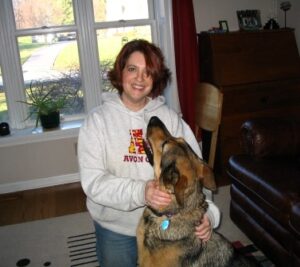 2. I write a lot about my dog, Sorcia, so most people probably don’t know I’ve always been a cat person. I’ve had cats all my life, and I can name them all. (Frisky, Mystery, Topaz, Regan, Pyewacket, Strider, Smokey, Gimpy, Claudia … finally Maui, the smartest and most personable cat I’ve ever had. Maui broke our hearts when he was killed on the road outside our house a few years ago.)

3. As an addition to #2 above, I was always scared of dogs. Barking made me flinch. Growling made me burst into tears. It was grief over losing Maui that made us suddenly decided to get a dog, and afterwards I wondered if we’d lost our minds! The first time I was left alone with Sorcia, I had a moment of panic. She looks like a wolf. She could eat me, I thought. I got over my fear pretty fast, though.

4. I also blog about skiing, so you might not know that I am a terrible athlete. I can’t swim with my face in the water because I never mastered rotary breathing. I only recently re-learned how to ride a bike — and had to unlearn the art of peddling backwards to brake, because that’s the only kind of bike I ever had as a child. I can’t throw a ball (or catch one either). Let’s not even talk about swinging a bat, a racket, or a club.

5. I met my husband at a murder mystery dinner party. I received a last minute invite because one of the girl attendees dropped out. Lucky for me.

6. The first album I ever bought was Blue Oyster Cult: Fire of Unknown Origin. I can still sing along to all the songs.

7. Um … I’m a wrestler in my spare time. No. I can do better than that. How about this? I was so frightened as a child by the urban legend of Bloody Mary — you know, the chick who will scratch your eyes out if you say her name three times in front of a mirror in the dark — that even to this day I avoid looking into a mirror if I get up in the middle of the night. So, when Georgia McBride asked me to write a short story for her 2013 Month9Books anthology of legend retellings … guess what I picked?

At this point, I’m supposed to choose 7 bloggers to pass this on to. But I was always leery of chain letters (guess I could have used that as one of my seven things). So instead, I’ll just invite you to share a little known fact about yourself in the comments!