Among my accomplishments this summer, I count the conversion of both daughters into Doctor Who fans. This was a big deal to me, because I spent a great deal of my youth watching this man: 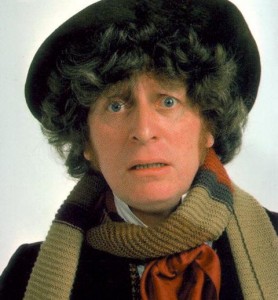 That’s the Doctor, played by Tom Baker from 1974 to 1981. I did watch the show after the Doctor regenerated (ie: was replaced by a new actor, Peter Davison). However, the next Doctor never won my heart. Although I can easily recount any number of plotlines that starred Tom Baker, I can’t recall any adventures of Doctor Who when he was played by Peter Davison.

Up until recently, I would have said Tom Baker was MY Doctor.

But then, BBC resurrected the series in 2005 with Christopher Eccleston playing the Doctor. Wow – a tough-looking Doctor in a leather coat! I liked him! But he only lasted one season, and I was sure I wouldn’t take to the new Doctor, David Tennant, and I quit watching the new series in 2006.

But I was wrong. After rediscovering the shows this summer with my daughters, I think David Tennant has become MY Doctor, although the newest one, Matt Smith, is growing on me, too. David Tennant wins for sexy though, because Matt Smith has a funny-shaped face and invisible eyebrows. 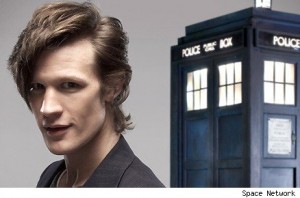 And how weird to think of the Doctor as sexy at all? The classic series avoided the subject entirely (which was fine for my teenage self). Although he always traveled with a young female companion, there was never the slightest suggestion of hanky-panky in the TARDIS. But the new Doctor?

Rose Tyler was in love with him, and most fans believe he was in love with her. Martha Jones had an unrequited crush on him, and Amy Pond tried to seduce him when she had cold feet about marrying Rory. River Song claims she had a long term love affair with him, hints they were even married, but it’s her past and his future, so that remains to be seen.

With the TARDIS turning into Peyton Place, it was a breath of fresh air to have Donna Noble on board in Season 4. She was the only companion in the new series not to have the hots for him! Good thing they laid down the ground rules from the start:

The Doctor: …With Martha, like I said, it got… complicated. And that was all my fault. I just want a mate.

The Doctor: I just want a mate!

Donna: You’re not mating with me, sunshine!!

The Doctor: A mate! I want a mate!

Donna: Well, just as well, cos I’m not having any of that nonsense! You’re just a long streak of nothing! Alien nothing!

The Doctor: Well there we are then. 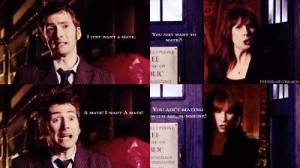