Would YOU Fly if the Pilot Didn’t Want To? 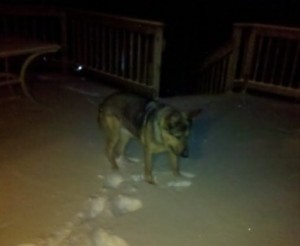 Sorcia says, “THIS is a blizzard?”

I may very well eat my words if I wake up tomorrow (not too long after this post is published) and discover 4 feet of snow outside, but at 10pm on Sunday night, the Big 2010 Christmas Blizzard seems to be a Big Nothing. Yes, I will admit, it’s pretty windy outside, but there’s not much in the way of snow.

However, thanks to the snow, we get to have my brother-in-law an extra day or two. My sister’s family is visiting from Kansas, but her husband had to leave ahead of the rest of his family. He was supposed to fly out of Philadelphia for business this afternoon, and at the last minute his flight was canceled. His airline, USAir, was surprisingly candid about the reason.

Apparently, the flight crew boarded the plane; the pilot took a gander at the conditions and declined to fly. USAir told the waiting passengers they were working on two alternative plans:

Plan A: find another pilot who was willing to fly in the snow and wind
Plan B: wait 20 minutes and ask the current pilot if he was willing to change his mind

At this point, my brother-in-law called the car rental desk to reserve a car to drive back to our house. Good move!

So, tell me, if the original pilot thought it was too dangerous to fly, would you hang around waiting for them to dig up a more reckless/compliant/stupid one?

And – what were they doing in those 20 minutes to try and change the original pilot’s mind?? I have a picture of them taking him to the bar and buying him a stiff drink to bolster his courage.

Plan A, Plan B … would you want to know their Plan C?