Saturday was a glorious day for a book launch party at the Hockessin Book Shelf in Hockessin, Delaware! I was thrilled to see so many friends, former teaching colleagues, fellow writers, and young readers come to celebrate the release of The Morrigan’s Curse. I even got to see a friend from high school who I haven’t seen (except on Facebook) since our 5th class reunion. (Which was only a few years ago — HAHAHAHA!)

Here are a few photos: 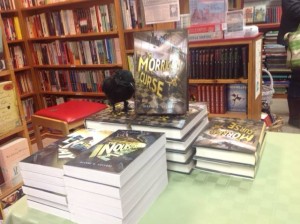 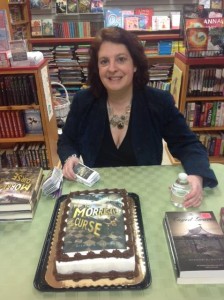 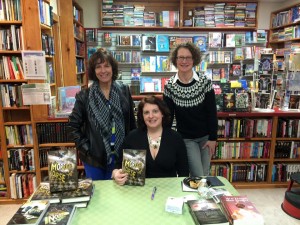 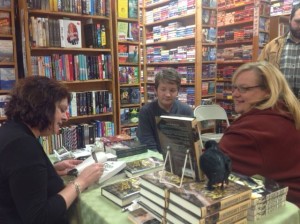 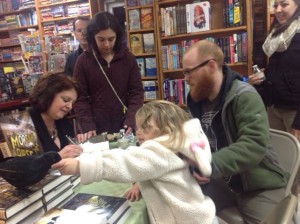 As I was getting ready to write this post, I remembered writing a similar one at the beginning of February 2015 for the launch of The Inquisitor’s Mark. Then I got a little curious about what I was blogging about in previous Februarys … and I took a little time machine tour, via the archives, to find out.

* Engage the machine that makes everything swirly*

2015 — Celebrating the release of The Inquisitor’s Mark.

2014 — Housebound by an ice storm. Using the opportunity to write 9000 words in The Morrigan’s Curse, specifically the first draft of the climax.

2013 — Finishing up the first draft of The Inquisitor’s Mark and getting ready for pre-release promotions of The Caged Graves.

2012 — Thinking about leaving my comfort zone to attempt an urban fantasy about a secret day of the week, even though I considered myself a historical fiction writer. Wasn’t sure I was going to do it. (!!!!)

2011 — Bemoaning the fact that I was feeling my way through the first draft of a WIP like I was playing Blind Man’s Bluff. (Interesting, since I’m doing that again this year …)

2010 — Alternately ranting about standardized testing and posting historical tidbits related to We Hear the Dead that nobody read because my blog was brand new and I didn’t have any followers.

*Let’s swirly ourselves back to the present*

An interesting trip! And a bit scary, since I’d forgotten how close I came to NOT writing The Eighth Day, which, as you can see, consumed my next three years.