A Writer Looks at Teotihuacan 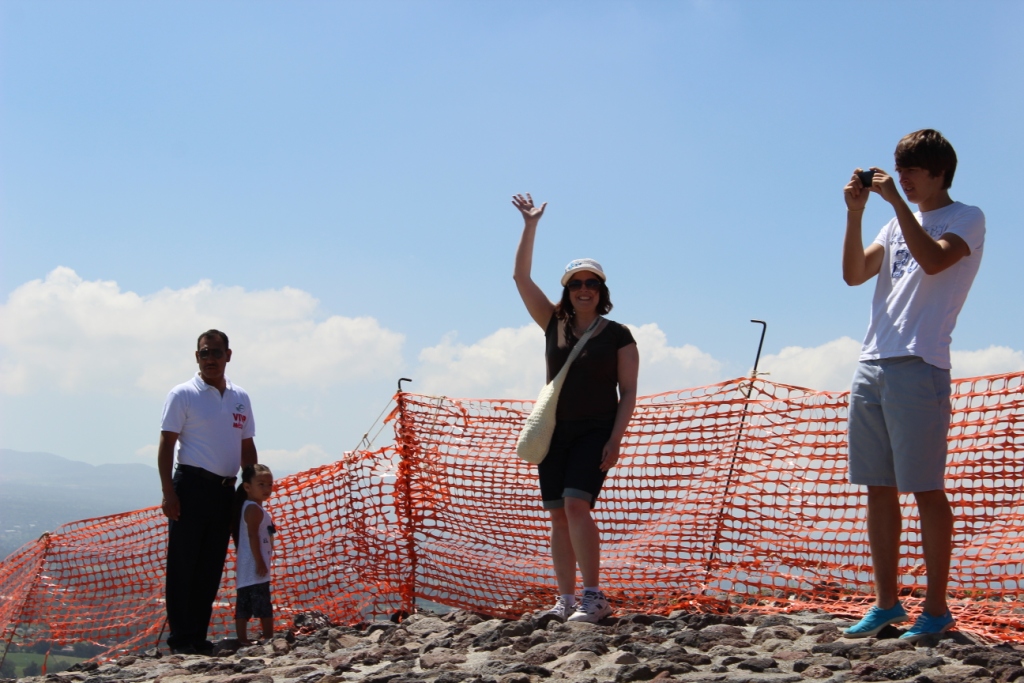 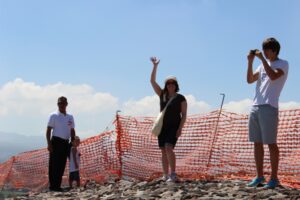 Yes, that’s me standing on some rocks next to a plastic construction fence. Of course, the rocks and fence are located here: 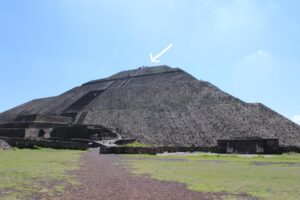 That’s the Pyramid of the Sun at Teotihuacan, Mexico. Last week’s adventure to Mexico was so incredible, I wasn’t sure where to start this post. So, I decided to cover it by topic over a few days.  Today’s topic: Teotihuacan From the Writer’s POV.
Two months ago this trip wasn’t even in our plans. I was working on my contemporary/urban fantasy GRUNSDAY.  The climax calls for the villain to transport my two captive MCs to a place of ancient significance for a cataclysmic magic ritual (think human sacrifice), while one of the other major characters follows them to attempt a rescue. My first choice was Stonehenge, because it’s an ancient calendar and GRUNSDAY is a fantasy about time. Plus, I’ve been there. But putting my characters on an airplane flight across the ocean presented logistical problems, especially for the rescuer. So, I decided to keep them on this continent.
My next choice was Teotihuacan, featured numerous times on the television show Ancient Aliens. If you can’t have Stonehenge for a magic ritual/human sacrifice, a pyramid’s gotta be your second choice, right? I researched the ruins via books and the internet. I spent a lot of time on YouTube watching people who’d videotaped themselves climbing the pyramid. But it’s not the same as being there.
So in June my husband said, “Why don’t we just go?” XOXOXO, Bob!
As a writer, I went with a specific agenda.  I needed to climb the pyramid, of course, and I’ll talk more about that on another day. But I also had questions relevant to my climactic scene, such as: If there was no one to stop you, could you drive a vehicle right up to the pyramids? The answer is yes. There were maintenance pick-up trucks driving all over the site. From the top of the pyramid, can you see a vehicle driving up to the base?  The answer, yes – or close enough. The pyramid is structured so cleverly, you have a good view straight down to the Avenue of the Dead below.

The fifth level of the pyramid is topped by a rounded incline to the platform at the very top. The platform (which was undergoing restoration and roped off by the orange plastic fence) is fairly small – large enough for the ritual I planned, but too small for the villain to have many guards with him. He would have to send his minions down one level, which is what I wanted anyway. The rounded hill is not symmetrical.  On one side, the slope is gentle and easily climbed. On the other, it is more steep.  I even found the spot where two of my characters take shelter from bullets being fired down at them from the top! 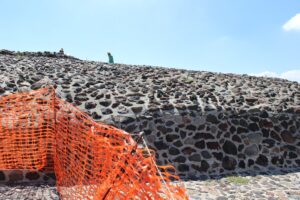 And, completely separate from the physical logistics of my climactic scene, there were many aspects of the setting that I could only appreciate by visiting Teotihuacan personally:
The writer in me got everything I wanted out of this visit.  My climax works, and my second draft will be revised to include details about the site and the surrounding area.  On Wednesday, I’ll share a little about the history of Teotihuacan, as well some awesome photos!