Some of you may notice I’ve given my blog a makeover. I liked the black slate with white text, but it gave me trouble every month with the First Impressions posts. It was hard to differentiate between the text being critiqued and the critique itself, and embedded junk leftover from cutting and pasting often made the post unreadable once it was published (although it looked fine in previews.)

I still have a few problems. I can’t get the new header centered, for one thing. And when I try to add newly followed blogs to the roll on my sidebar, they don’t appear in my list. I could add them one by one using their URLs, but why take all that time when there’s a button that’s SUPPOSED to do the work for me? Grr.

Facebook had a surprise for me this week, too. I’m not talking about the new layout, but a friend request from the main character of my WIP. For a moment, when I saw that Mick Brewster was “friending” me, I wondered if I’d completely lost my grip on reality. But then, sanity returned as I realized who was behind it:

So, I friended him and discovered she’d put quite a lot of thought into his profile. Parts of it made me giggle:

It still gives me a start when Mick’s posts appear in my feed — and a laugh when my beta readers respond to him. 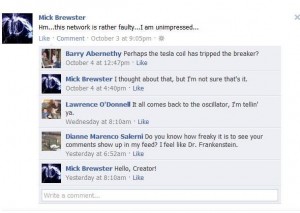 Clearly, Teenage Daughter has too much time on her hands. I should get her to handle the social media campaign for my next book when it comes out. Heck, I should rent her out to other writers!

Anybody want to bid on a teenage social media guru?