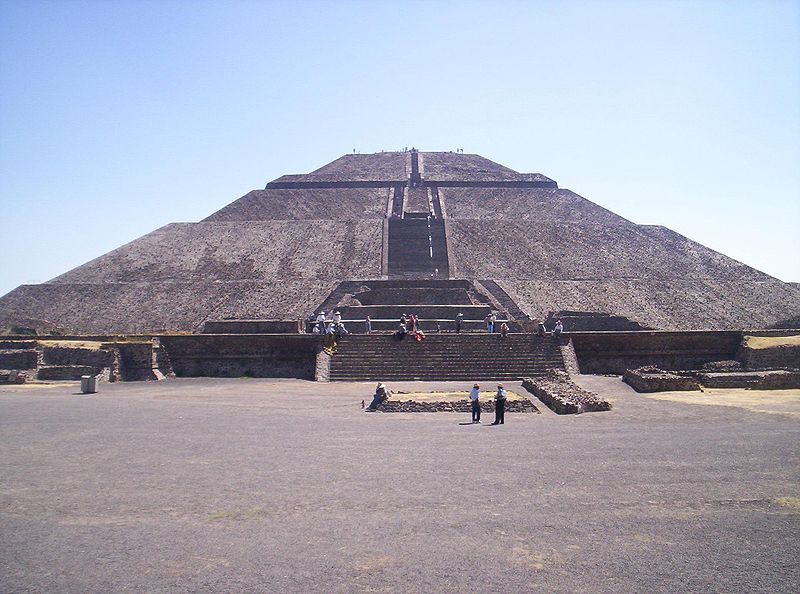 Late last Thursday night, I finished GRUNSDAY, the manuscript I started on April 2.  Fifteen weeks of writing (interrupted by work on THE CAGED GRAVES twice), and it finished up at a bloated 98.5k words.  Yikes.
It’s a mess, too.  World-building errors, the voice isn’t quite right, and it loses focus in the middle. (Which tells me exactly where I need to do some major slashing).  But I did it, and this is a big deal for me because the story is well outside my comfort zone.  It’s contemporary – and a fantasy. I took a risk, and there were times I told myself I wasn’t going to be able to pull it off.
One of my biggest worries (besides the world-building) was the climax.  For some insane reason, I was set on having the climax take place here:

That’s the Pyramid of the Sun at Teotihuacan, Mexico.  I’ve never been there – but that’s where my protagonists were supposed to fight for their lives.  So, I bought a book. I looked at pictures and articles on the internet.  I watched videos on YouTube of people climbing to the top.  And I put together a climax that satisfied my CPs – although I know it’s probably not as accurate as it could be.

Or as it WILL be.
Because my husband is taking me there next month! We’ll be spending two nights at a hotel adjacent to the ruins, and my husband has arranged for a private tour guide who knows I’m doing book research and will take me exactly where I want to go.  I am going to climb that pyramid and see exactly what my characters will see.  I’m sure I’ll have to change some details, but I no longer have any doubt that I’ll be able to fix whatever needs fixing.
I made it this far!  Woo hoo!
Have I mentioned lately what a great guy my husband is?  XOXO, Bob!