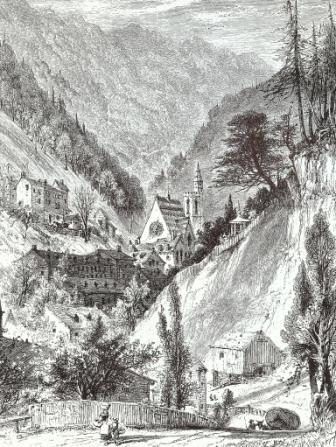 Thanks for the great response to Marcy Hatch’s first page on Friday!

And now it’s my turn. The first page of my WIP is appearing here and at Mainewords today.  I put this project aside to work on my revisions and line edits for THE CAGED GRAVES, but when I get back to it, I’ll probably do a major overhaul on the 55k words I wrote before moving forward. So feedback is very welcome!

This is the first page of PORTAL, a YA historical adventure.

When Aunt Eggletine suggested again that all their problems might be solved if her niece would just considermarrying her fourth cousin, Ardeth hurled a breakfast roll across the table.
Eggletine Meriwether ducked the airborne missile without spilling a drop of tea.  “Really, Niece!” she said. “For someone who doesn’t know where her next meal is coming from, you are quite reckless with your pastry.”
She had a point, but Ardeth chose to address the other matter. “It might solve yourproblems, Aunt, but I’d be the one married to him! A Harrison! Named Micajah, no less!”
“One shouldn’t judge a person by his name.”
Her niece raised her eyebrows. Eggletine Zylphia Meriwether would say that. “For all I know, he’s short and fat and bald.”
“For all he knows, so are you. And still he makes the offer.”
Ardeth sniffed. She was a catch.  Hadn’t that prince in Arabia offered her father a fortune to add Ardeth to his harem? “Hair like a field of wheat and eyes like limpid pools …” That’s what he’d said—and she only fifteen at the time!  Of course, when the prince went on to describe her figure, Erasmus Meriwether had clouted him in the nose.  They’d been lucky to escape in their hot air balloon, considering all the commotion that caused. Some of those flaming arrows had come awfully close!
“He’s blood kin.” Ardeth returned her attention to the subject at hand. “Our children would have two heads.”
“I doubt you share more than a drop of blood between you.” Aunt Eggletine polished her breakfast dish with her own roll. “Your children would be perfectly hale and hearty—not to mention wealthy.”
Of course, that was the point. Otherwise there wouldn’t have been a marriage offer at all.
“My grandfather picked him for me.” Ardeth delivered what she knew to be her most powerful argument. “That’s reason enough to avoid him.”