Learning to Plot with Scrivener 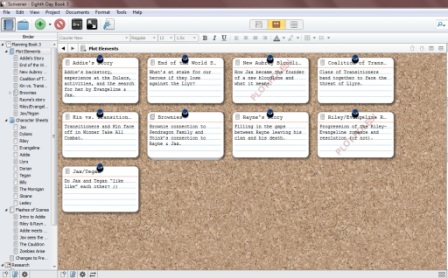 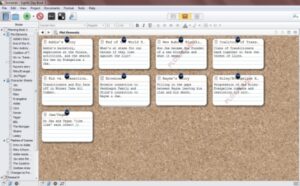 Based on recommendations from people who’ve tried Scrivener, I went ahead and bought it – especially after I realized it was only $40.  At that price, I thought, why not?
So far, I’m loving it – but only for plotting and planning. I have no intentions of drafting a manuscript with Scrivener. The word processing part of it feels clunky, and I can’t imagine writing a book that’s chopped into little bits and has to be put together after I’m finished. One of the reviewers on Amazon said, “The thing to understand about Scrivener is that it’s a chunk-based writing system. It’s for people who write in chunks, or scenes, which is, actually, most people.”

Well, speak for yourself, buddy. I write my first drafts in a linear fashion – from the beginning to the end.  It’s the only way I can find the story and understand my characters (no matter how much planning and outlining I do beforehand). And thanks to Matt McNish introducing me to the Document Map function of Word, I have no trouble navigating my manuscripts.
However, as a method to organize my scattered thoughts during the planning stages, Scrivener rules!  Sure, I could keep all my notes in Word files. That’s what I’ve done up to now – and they’re a mess. I recently opened up all my saved files for THE EIGHTH DAY and was surprised to see how many documents were labeled Brainstorming, Ideas, Outline for Chapter 7, Problems I Need to Fix, Character Motivations, etc. I’m pretty sure most of them had only been opened once, and every time I needed to brainstorm, I started a new document rather than look at the ones I had.
For THE EIGHTH DAY #2, I kept a paper notebook of ideas. I won’t even go into what a mess that was. Plus, I kept losing it. (Dianne rampages around the house: “Anybody seen a blue notebook?!”)
Scrivener is all about chunks, and that’s not how I write, but it IS how I plan. I’ve never been good at outlining, and if you’ve ever heard anybody talk about planning DOT TO DOT, that’s the best description of how I do it. Scrivener holds all my DOTS in one location, where I can see them all, rearrange them, expand them and collapse them.  I love that any file can be both a document and a folder.
Maybe it’s just a cool new toy. I’ll have to report back and let you know if I actually produce a book plan with it!