Ride in a Riker: The Perfect Automobile 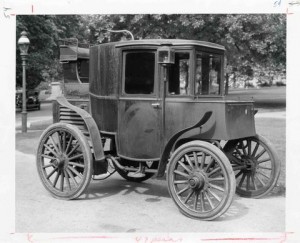 Meet the Riker Demi Coach Electric Automobile, which my character Ann Henry drives in my WIP. Awesome, isn’t it?

Did you know that electric cars predated gasoline-powered cars, and that if industry had gone a slightly different way, American cars might have been electric all along? Can you imagine how the world might be different today if we’d taken this alternate path?

As odd looking as the Riker seems today, it was typical of automobile designs of the early 1900’s. Most of them copied the design of various horse-drawn carriages, wagons, and light-weight phaetons, except without the horse. I was surprised to discover that they were steered with rods – kind of like a bike – instead of wheels. This particular model was designed to be driven by a chauffeur who sat in the back, on that high seat seven feet in the air, steering with a rod. The passengers would sit quite cozily inside, on two facing benches.

Why didn’t electric cars become the norm? According to an interesting little website called Electric Cars are for Girls, we can blame a marketing error (designing electric cars for the comfort of women instead of the manliness of men) and Henry Ford.

Electric cars were, apparently very popular with women at the turn of the century. Check out this video of two women assembling and driving away in a Folding Car!!