What I’ve Been Up To 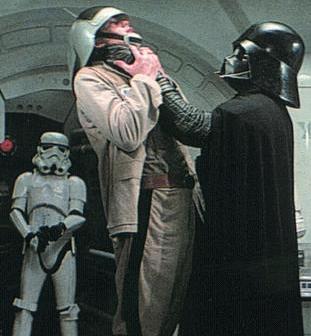 This has been me for the past two weeks or so:

Not Darth Vader. The poor guy hanging in the Sith Lord’s grip, unable to get away. The role of Darth Vader in my life was filled by my WIP. It had me by the throat and would not let go.
Even at work, I walked around muttering to myself in the voices of my characters, drawing little maps on scraps of paper, and choreographing action scenes. Yes, I was into the Climactic Crunch – the part of the book I’ve been visualizing for so long.
Over the 3-day President’s Weekend, I wrote 9,000 words. My feet finally touched the ground around noon on Monday when I typed THE END on the first draft of THE EIGHTH DAY #2.  Phew. *Rubs neck.* That was intense.
I started the draft on December 4. Seventy-seven days from beginning to end.  I know that might not seem like a feat to anyone who’s succeeded at NaNo – producing 50,000 words in 30 days.  But this was the fastest I’ve ever written a manuscript. And it finished at 75,000 words, about 10k over budget. That’s typical. In anything I draft, I write AT LEAST 10,000 unnecessary words. What that says about me … well, draw your own conclusions.
Most people like to give their manuscripts a rest after completing a first draft. Not me. My first drafts are pretty exploratory, and I usually don’t discover the heart of the story and the soul of every character until the end. Not even in a sequel, as it turns out. By the time I’ve completed the first draft, I have a laundry list of revisions to make for the second draft, and I’m ready to roll right in.  The second draft goes out to beta readers … and then I take a break from it.
What’s got you by the throat lately?
Do you rest after a first draft? Or plunge right into revisions?