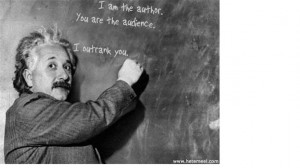 I see a lot of talk on the blogs about writing characters – especially establishing goals for your characters, putting obstacles in their path, directing your characters like rats in a maze by blocking the path and making them work harder to fight their way out.
Sometimes I wonder if the reader sees through all that plotting. The last thing you want is your story looking transparently like an equation: character + goal < obstacle = need for ally + escalate action > new obstacles = goal achieved + boy gets girl.
Writers want to build a world that is convincing and real, a world in which the reader can become immersed – and create characters the reader worries about every time s/he has to close the book to eat dinner, shower, or go to work. But I don’t think we should forget that the author is in charge on the other end – manipulating the reader. Yes, think of the reader as your puppet. You’re in charge of what they know and what they think.
A few years back, I was working on a short story for an anthology with editor Michael Katz. The ending of my story was a real dud, and we were brainstorming alternative endings (let’s call them A and B). I liked Ending A, re-wrote the story to incorporate it, and sent it to Michael. His response: “Wonderful! Much better! Now, re-write it again so the reader thinks you’re going for Ending B, while you’re really heading for Ending A all along.” And he was correct.
So, I’ve spent the last few weeks mulling over the beginning of my current WIP. I just wasn’t getting it right, and for a long while, I didn’t know why. I knew what my MC’s goal was, and I felt as if the reader would understand it – but somehow, the whole thing came out flat.
Then I realized. Who says the reader has to know exactly what his goal is? Yes, of course I need to establish his goals, determine his obstacles, and make sure all his actions are designed to overcome them. That’s my job.
But that doesn’t mean I can’t mislead the reader into thinking his goals are something else entirely. Something that already fits the story and makes just as much sense. Something that adds more tension to the opening.
Sure, I’ll reveal the truth along the way. But I’m the author. I get to say when.
The interactive Einstein blackboard above is from Hetemeel.com. The quote on the board is from The Producers by Mel Brooks, of course!