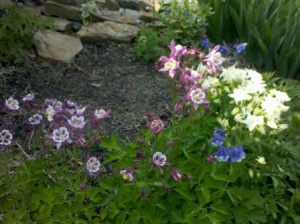 I love columbines. Since I’m not a very good or industrious gardener, I like plants that take care of and propagate themselves, and columbines certainly do that. They also transform themselves, and every year I love to see what new combinations they’ve produced.

I started out with only the purple & purple and white & pink varieties. One had upturned flowers; the other had the more regular downturned blooms. All these other combinations produced themselves – white & white, white & purple, lavender & purple, light pink & dark pink, and this lovely burgundy. They’ve also spread themselves all over the yard, front and back, and I expect my neighbors are finding them too. (You’re welcome, folks.) 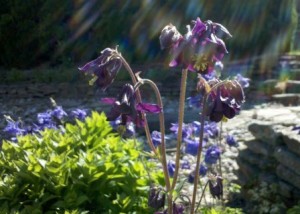 Stories transform themselves, too, even as you’re writing them. Just because you’re the author doesn’t mean you’re in charge. The story I thought was about psychic researchers turned out to be the story of a girl desperately camouflaging herself among ordinary people, trying to smother everything about herself that was extraordinary. The story I thought was going to be about a fantastic scientific discovery turns out to be about a young man trying to redeem himself for a crime he committed when he was too naïve to know any better. The heroine who was supposed to choose one boy eventually chose the other, because he turned out to be better suited for her. 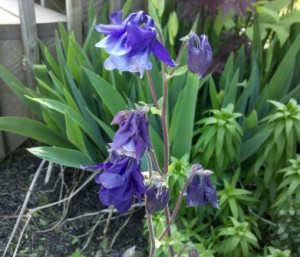 In every case, I thought the story was about the situation, but instead it was really about the people. And I didn’t know squat about the people until I met them while writing the story. As for the brand-spanking-new WIP about the end of the world? Well, I have no idea what that story will turn out to be, but I’m sure my main character Miri will let me know when she’s ready.

How have your stories transformed before your eyes? How have they surprised you?