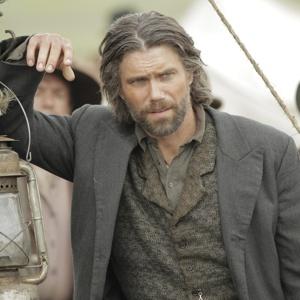 “Dianne, you know that scene sucks, don’t you?”

Last week I was clobbered by The Return of the Sinus Infection. Clearly one course of antibiotics didn’t do the trick, although it’s amazing how you can feel perfectly healthy one day and then knocked down with a hammer the next.

Not a lot of productivity happened last week. I did binge watch Hell on Wheels on Netflix — until I was ambushed by the death of a certain character at the end of Season 2. I’m not sure I want to go on watching the show after that, and the death scene bothered me so much I couldn’t sleep that night. (The same thing happened when I saw the Red Wedding episode on Game of Thrones.)

My WIP stalled too. Partly because sitting up made me dizzy. But mostly because I knew the next scene planned had some major flaws in it. Logical flaws. Character arc flaws. Plot issues. But after three days of lying on the couch, admiring Cullen Bohannon’s trademark slouch and glower, I was unable to think of any other way to take the story.

Finally, I shrugged and said, “First drafts suck anyway.” I wrote the chapter.

You know what? I learned some things while writing it. World-building related things. Character things. This scene may change drastically or disappear altogether in the next draft, BUT IT WAS WORTH WRITING.  Even when writing a scene you know is kind of lame, you might find a shiny nugget that will make you smile, rejuvenate your interest, and make you think, This going to get interesting in revisions …